Home / Military Life / Act of Valor – Father’s Day Movie Giveaway
by Ryan Guina, Last updated: May 6, 2019 Advertiser Disclosure: Opinions, reviews, analyses & recommendations are the author’s alone, and have not been reviewed, endorsed or approved by any other entity. This site may be compensated through the advertiser Affiliate Program. For more information, please see our Advertising Policy

I recently had the pleasure of watching the movie Act of Valor, which features active duty Navy Seals as actors. The directors wanted authenticity in the movie, and in my opinion, using real Seals made a huge impact in the action scenes. This movie was recently released on Blu-Ray and DVD, and I had the opportunity to receive a review copy, and I also have 3 copies to give away to our readers – just in time for Father’s Day! (more on the giveaway in a moment).

Act of Valor – A Movie About Navy Seals 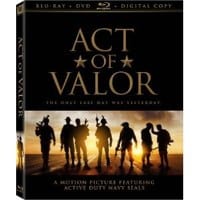 If you haven’t seen the movie yet, I’ll give you a brief synopsis, without any spoilers. The basic plot surrounds a Seal Team which is assembled to perform a rescue mission in South America. The movie starts with the Seal Team at home station, and their last night before heading out into the field. The Seal Team performs the rescue mission, which turns up some important evidence about a large scale terror plot, which sends the Seal Team on related, but separate missions to South America, Somalia, Mexico, and the South Pacific to thwart the terror attack.

Overall, the movie is full of action, and gives a good look at what the Seals go through in order to help preserve our way of life.  This movie is fictional, but it based on some real-life missions Seals have performed since the War on Terror began. In other words, it’s as close to real life as you can get without sacrificing security. They even used live ammunition in parts of the filming, adding authenticity to some shots. It’s also worth noting this move is not a recruiting or propaganda movie. The movie is filmed in a matter of fact manner, without dragging out scenes or unnecessarily inflating the drama.

One of the important elements of the movie is the family life – the movie does a good job of showing that Seals are just like all of us. They have families they care deeply about, and they make sacrifices when they have to leave on their deployments and missions. It’s easy for the general public to think of Seals as mythical modern day warriors, without stopping to remember they are normal people with extraordinary abilities and who do extraordinary missions.

The movie was very good, but it isn’t without its faults, though. The primary lead actors are 8 active duty Navy Seals, and while they are elite in terms of their military skills, some of the dialogue and acting seemed a little forced, though not to the point of distraction. Additionally, the missions and action scenes, while amazing in their own right, seemed a little too perfect in some cases, with the Seals hitting head shot after headshot on the enemies. Maybe the Seals are that good in real life (I’m not one to doubt the skills of such an elite unit), but it seemed a little too Hollywood at times. On the flip side, Hollywood didn’t go for perfection in every aspect of the storyline. People can and do get hurt on live missions, and this movie showed this. It’s important to remember that many military members put their lives on the line every day to protect our way of life.

The ending is one you don’t want to miss – and by the time it is over, you can see where the movie title comes from. Navy Seals are an elite fighting unit and we are lucky to have them on our side. And I for one, am thankful for the sacrifices they make on a daily basis to keep us safe.

Verdict: Act of Valor is well worth watching, and definitely worth adding to your library of movies if you are a fan of military movies. You can also check it out on Netflix (free one month trial, and review).

I was contacted a few weeks ago about the PR firm for the movie’s release and they announced the movie’s producers and distributors will donate a portion of the DVD sales to Operation Homefront ($1 from every sale through 11/30/12, up to $100,000).

Twentieth Century Fox Home Entertainment in cooperation with Relativity Media and The Bandito Brothers pledged today to give a portion of the proceeds from the ACT OF VALOR Blu-ray and DVD to Operation Homefront.  Operation Homefront is a national non-profit organization that provides emergency financial and other assistance to the families of our service members and wounded warriors.  ACT OF VALOR will be available on Blu-ray Combo Pack and DVD everywhere June 5th.

The PR firm also provided the 3 movies we have for a giveaway – so a big thanks to them!

Hats off to the entire production crew, and especially the Seals involved in the movie, the US government for allowing them to participate, and for all the unsung military heroes who remain behind the scenes every day, doing what they do to keep us safe.

How to Win a Copy of Act of Valor

I only have 3 copies to give away, so I will make this easy. There are two ways to enter. If you subscribe to our newsletter, you can respond to the newsletter we will send out next Tuesday (instructions will be in the newsletter). You can also enter by leaving a comment in this article. The comment must be your thoughts on this movie if you have seen it, or tell us your favorite military movie. That’s it – two easy ways to enter! (Giveaway ends June 22, 2012 at 11:59pm).

Note: Winners will be decided by a random drawing, and all decisions are final. Winners must be located in the US, or have a military mailing address such as APO, FPO, etc.

This site uses Akismet to reduce spam. Learn how your comment data is processed.