Home / Military Life / How to Get a Military ID Card – Eligibility, ID Card Facility Locator, Required Documents, and More
by Ryan Guina, Last updated: February 25, 2020 Advertiser Disclosure: Opinions, reviews, analyses & recommendations are the author’s alone, and have not been reviewed, endorsed or approved by any other entity. This site may be compensated through the advertiser Affiliate Program. For more information, please see our Advertising Policy

A military ID card or dependent ID is a valuable card which can unlock a variety of valuable benefits, such as health care through TRICARE, education benefits, and access base facilities, including the commissary, base exchange, MWR centers, and other support agencies.

You are usually eligible to receive a military ID if you are a military retiree or are currently serving in the military (active duty, Guard, Reserve, or Inactive Ready Reserve). Certain dependents are eligible for dependent ID cards as well (see below). You also need to required paperwork. We cover all of these details in this article. Are you eligible for a military ID card?

There are many reasons why proof of military service can come in handy – including securing veterans benefits, proof of service for military discounts, or just to show off your military pride. Thankfully, the US Government created the Veterans Identification Card Act 2015 which authorizes the VA to issue Veteran ID Cards to all veterans with an honorable discharge. The VA began issuing these cards in November 2017.

Please note these Veterans ID Cards are not military ID Cards. They simply show you served honorably in the US Military, and will not function to provide military benefits, base access, or other veterans benefits. If you served in the military and have since separated from, but didn’t retire from the military, you may not be eligible for a military ID card.

In this article, we will cover information about some of the forms of military ID that are available, who is eligible to receive one, and alternative forms of identification to prove military service if you are a military veteran who is not eligible for a military ID card.

In general, you must be in the DEERS system to receive a new military ID card. This includes the servicemember (sponsor) and eligible dependents (who must be entered into DEERS by the sponsor). Here are some general rules regarding military ID card eligibility. Check with your local issuing base personnel office for more specific information.

In addition to being in the DEERS system, you will need at least 2 forms of acceptable ID (see below for list of accepted forms of ID).

For more information about where to go, contact your local base personnel office, or visit the Rapids Site Locator (RSL) for ID card requirements and to locate the nearest ID Card Facility/RAPIDS Station based on City, Zip, State or Country. Here is a RAPIDS Appointment Scheduler user guide to help navigate the site and set up your ID card appointment.

The secondary identity source document may be a form of ID from the list above, provided it is not the same type. For example, you cannot use two different passports from two different countries as your form of ID.

The DoD phased out the use of Social Security numbers on Military ID Cards and Retiree ID Cards starting in 2009. The DoD ID Number is now the primary identifier.

There are two types of Veterans ID Cards issued by the VA. The Veteran ID Card (VIC) and the ID Card used for healthcare services. 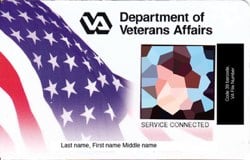 Veterans must have an honorable discharge to be eligible for this new Veterans ID card. Learn more about how to upgrade your military discharge characterization.

Many veterans believe they need to be receiving service-connected disability benefits in order to be eligible for VA health care benefits. This is not the case. All veterans are potentially eligible, based on different criteria, including when and where they served, whether or not they have a service-connected health condition, if they were discharged for medical reasons, served in a war zone, recently returned from an overseas deployment, or other conditions. Each situation is unique and each veteran should contact the VA to determine their eligibility status.

Update: Beginning on January 1, 2020, veterans with a VA Health Identification Card are eligible to access military installations to use the Base Exchange, Commissary and certain MWR activities.

Other Ways to Prove Military Service

Your DD 214 Will Prove Military Service

The easiest way to prove your military service without one of the above ID cards is with a DD Form 214, which is the document which serves as your service record. This is issued to all military members when they separate from military service (the military used to issue a wallet-sized DD Form 214, but so far as I know, this is no longer the case).

Unfortunately, carrying around a letter size document is inconvenient. One tip we have received from many veterans is to take your DD Form 214 to an office supply store such as Office Depot, Office Max, Fed-Ex/Kinkos, etc. and ask them to shrink the card to a wallet size version and have it laminated. This will give you a wallet-sized document that will prove your service.

Note: Your DD Form 214 is one of the most important documents you will receive, so keep good care of it! Here are more details on the DD Form 214, including how to get a new DD 214.

If you do not have access to the above veterans ID card options, you may still be able to prove your military service in other ways.

Unfortunately, a DD Form 214 isn’t a photo ID, it is simply a document. Thankfully there are many other ways to prove your military service.

If you are looking for a photo ID or other wallet-sized ID to prove your military service, then these may be good options for you:

Do you know of any other forms of ID that can be used to prove military service? If so, please contact us. We will add it to the list.

This site uses Akismet to reduce spam. Learn how your comment data is processed.