Roth Conversions: Why Timing is Important

There is an ever-old discussion on the importance of saving for retirement. And ever since the Roth IRA was created by the Taxpayer Relief Act of 1997, there’s been a similar discussion on whether you should contribute to a traditional IRA or a Roth IRA. Finally, there has been just as much discussion on whether…
Advertising Disclosure. Since most people are eligible to take a tax deduction on their IRA contribution, this involves paying taxes on the conversion amount, then transferring the remainder to their Roth account. However, there are many factors that can determine how beneficial Roth conversions can be.

In a previous case study article, we explored the impact of Roth conversions at various tax brackets. Not surprisingly, the higher the tax bracket is, the less after-tax money is available in the Roth account. However, this two-part article aims to discuss:

What’s the tax-equivalency principle? Simply put, it states that as long as tax rates remain the same, two tax-advantaged accounts will yield the same after-tax amount, regardless of whether the contribution was taxed upon contribution or upon withdrawal.

For example, Jane and Joe each have $5,000, which are in traditional IRAs. Jane decides to keep her traditional, and Joe into a Roth. Both are in the 25% tax bracket, and remain so over time. They also make identical investments. Since Jane made her contribution on a pre-tax basis, she starts off with $5,000. Joe has to pay taxes on his contribution, so he only starts with $3,750 ($5,000 minus 25%).

Let’s fast forward 20 years, when they plan to withdraw from their accounts. Their identical investments have achieved an average annual return of 8%. Jane would have $23,304.79, while Joe would only have $17,478.59. However, when you tax Jane’s pre-tax IRA at 25%, her account ends up at $17,478.59…the same as Joe’s. That’s the tax-equivalency principle: Assuming identical investments remain at the same tax rate over time, it doesn’t matter whether the contribution is taxed or the withdrawal is taxed. 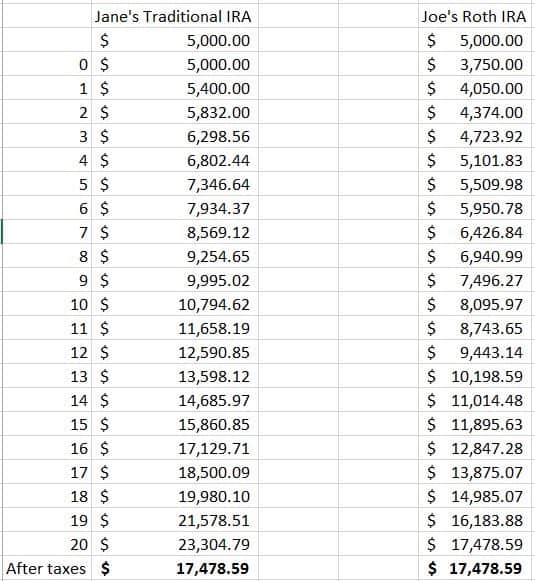 Of course, most people do not stay in the same tax bracket forever, so let’s look at what happens when tax rates change over time.

What Would Happen if Joe and Jane’s Tax Rates Went Up?

Using the previous example, let’s say Joe and Jane are wildly successful over the course of their careers. Instead of staying in the 25% tax bracket, they eventually move up to the 35% bracket. How would this change their after-tax values?

Joe’s account value would stay the same-$17,478.59, since the change in tax bracket has no impact on his Roth account. However, Jane’s account would only be worth $15,148.11 after taxes. In this case, Joe paid taxes on his account at 25%, which allowed him to avoid paying taxes at 35% later on. What Would Happen if Joe and Jane’s Tax Rates Went Down?

Instead of moving into the 35% tax bracket, let’s assume Joe and Jane retire, and move into the 15% tax bracket. How does their after-tax value change? The complexity is what happens when tax rates change over time. The next article will outline how these changes might occur over the course of a military career, and illustrate opportunities to optimize your Roth conversions. Early Withdrawals From Your TSP and IRA After The Military