The military recognizes that military medals are often a cherished part of family history and makes replacement medals, decorations, and awards available to veterans or their next of kin if the veteran is no longer living or able to make the request on his or her own behalf. Requests for replacement medals, decorations, and awards…
Advertising Disclosure.

The military recognizes that military medals are often a cherished part of family history and makes replacement medals, decorations, and awards available to veterans or their next of kin if the veteran is no longer living or able to make the request on his or her own behalf.

Requests for replacement medals, decorations, and awards should be made to the veteran’s respective branch of service, with the exception of Army and Air Force (including Army Air Corps) veterans; requests should be sent to the National Personnel Records Center (NPRC) in St. Louis where the records will be reviewed and verified. The NPRC will then forward the requests to the respective service where the medal, decoration, or award will be issued.

Who Can Request Replacement Medals or Decorations? 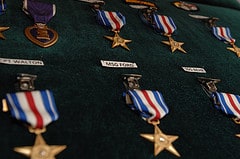 Are you Next-of-Kin, or part of the general public? When it comes to military records requests, there are three categories of people who can make a request. They include the veteran, Next-of-Kin (NOK), and the general public. It is important to note that Next-of-Kin doesn’t include all familial relationships. According to the National Personnel Records Center (NPRC), NOK includes:

How to Submit a Request

You can request replacement military medals, decorations and awards via form SF 180, Request Pertaining To Military Records. This form can be downloaded from https://www.va.gov/vaforms/.

Each request should be filled out neatly, and should include the veteran’s branch of service, social security number, dates of service, and it should be signed by the veteran or the next of kin if the veteran is incapacitated or deceased. Supporting documentation such as discharge paperwork or the veteran’s DD Form 214 or other military records can help speed the process. Additional information on where to send the form and who is eligible to make the request can be found at the NPRC website.

How Much Does it Cost?

Members of the general public may be able to request a copy of the servicemember’s military records, but are not able to receive a medal issued by the service. However, they would be able to purchase these from commercial sources (see below for more information on where to buy replacement military medals, rank insignia, and other military decorations).

Where Can I Get Copies of Other Military Records?

Most military records are maintained at the National Archives. These records include your service contracts, separation paperwork, records of military awards, decorations, and medals, records of your duty stations, and possibly more.

Where Can I Purchase Replacement Medals, Ribbons, Rank Insignia, or other Military Items? If you are a servicemember or retiree, you can purchase them at your base clothing sales store. Everyone else should look at military surplus stores, or any of the many online stores that specialize in military rank, insignia, medals, ribbons, uniform items, and similar military gear. A quick online search should bring up many results. It’s always a good idea to shop around for quality and price. A good place to start is USAMilitaryMedals.com, which guarantees the quality of the products they sell. 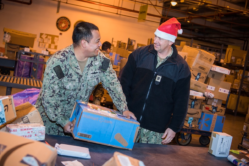