Did Tax Day come a little quickly for you this year? If so, you can file for a free extension on your taxes. Filing an extension gives you until October 15th to file your tax return. It’s important to know that while anyone can file for a tax extension, you are still required to pay…

Did Tax Day come a little quickly for you this year? If so, you can file for a free extension on your taxes. Filing an extension gives you until October 15th to file your tax return. It’s important to know that while anyone can file for a tax extension, you are still required to pay any taxes to the government by April 15th, even if you filed for a tax deadline extension. You will need to pay a minimum of 90% of your total tax bill to avoid late fees or penalties. If you are expecting a refund, there are no fees or penalties for filing your return late. This makes sense – the government is in a hurry to get your money, but not in a hurry to give it back!

The above rules apply to almost everyone. However, some military members and civilians are eligible for a tax extension without being required to pay the minimum estimated taxes – provided they are serving overseas in direct support of a combat operation. Let’s take a look at the rules for these tax deadline extensions.

Military members who served overseas in a tax free zone in the previous or current tax year are eligible to apply for an extension to file and pay their taxes. In many cases they will not have to pay estimated taxes before April 15th if they will owe taxes this year. This is a nice way for he IRS to recognize your duties in serving our country. The tax return deadline for those who file extensions is normally October 15th. However, if you deployed to a combat zone, your deadline for filing taxes will depend on when you were deployed, and when you returned from your deployment.

Let’s begin with your deploy start date. You count the number of days to the normal tax filing deadline (normally April 15th unless it falls on a holiday or weekend; then the next business day). Take this number, then add 180 days. This is the total number of days you have until your tax return is due. You add this number to your redeployment date; this gives you your tax return due date.

Tax Extensions Can Be Added on Top of Each Other

It is possible for these extensions to stack on top of each other. Let’s use the above example and assume the military member was deployed from April 1, 2014 through Oct. 1, 2014. As we mentioned, the new tax filing deadline would be April 15, 2015, the same day as this member’s 2014 taxes would be due. However, if the service member deployed to the AOR again before the April 15th deadline, he would be able to extend the deadline one more time, and any time would carry over with the same formula.

Word of advice: don’t let things go that far. I know taxes aren’t fun, but you don’t want to extend them indefinitely. It will make your bookkeeping much more difficult in the long run, and increase the odds of you or the IRS making errors in your return. This could be costly in terms of dollars or time spent. My recommendation is to get your taxes done as soon as you can so you can avoid any unnecessary delays or problems.

Which locations are eligible for a tax deadline extension?

According to the IRS,

This deadline extension applies to certain civilian members who are serving in a combat zone in support of military operations. This includes career fields such as Merchant Marines, Red Cross workers, civil service members, accredited correspondents, and civilian contractors. The hey here is the duties must be in direct support of military operations. Simply being a civilian in the country and working a civilian job not related to military service is not enough to qualify for the extension.

Installment Payments to IRS Can Be Deferred

If you are deployed to a combat zone while making installment payments on an IRS debt then you can defer your payments without penalty or interest. You can defer payments for the duration of your deployment, plus 180 days. This can give you a breather and hopefully a chance to catch up with your financial obligations. That said, you may be able to continue your payments without as much financial problems due to the increased pay you will receive while deployed (tax free pay, hostile fire pay, per diem, and possible other pay). To defer your payments, you will need to contact the IRS office you are making payments to and work with them to set up the new plan.

Need More Info? See the IRS Regs or Speak with a Tax Pro

Tax returns can get more complicated if you have a family and file a joint tax return with your spouse. In most cases, your spouse will get the same extension as you. The deadline only applies to individual taxes and income from a small business when taxed as a sole proprietor. These extensions do not apply to you if you have a business taxed as an LLC, S-Corp, Corporation, and some other small business entities.

Each case is unique, so you want to use this page for general guidelines. Always do your own research and consult with the IRS regulations (see IRS pub 3, linked above). The IRS also has a dedicated military tax extension page on their website with FAQs. Finally, if in doubt, consult with a CPA, IRS Registered Agent, or other tax pro. Taxes are one area where it is worth it to pay for professional advice.

The military pay system is full of rules that are specific to military members and many of them can have an affect on your taxes. When in doubt, contact a tax professional for more information regarding your specific situation! 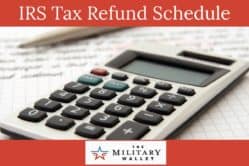