Military members and their families often have unique tax situations. These tips can help you prepare your taxes and ensure you get the largest tax refund possible.
Advertising Disclosure. 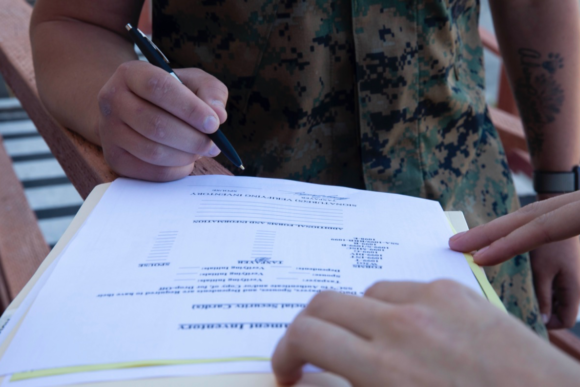 Many service members dread filing their taxes every year. For some, it’s almost as bad as going to the dentist. There are so many rules for filing your taxes. And, as military members, interpreting those rules can be even more complicated.

But, it doesn’t have to be that way. There are a lot of resources for members of the military to help you file your taxes on time and correctly.

Here are a few common situations for military members and their families to be aware of when filing income taxes, plus some tax tips to help you maximize your return.

Live and Work Outside Your State of Legal Residence

Members of the military may keep their home of record as their state of residence, or change it as they move around over the course of their careers.

You can also change your state of legal residence to the one you plan to return to in retirement.

Home of Record vs. State of Legal Residence

Your Home of record is the state from which you entered active-duty service (that the military will pay to move you back to when you finish your term of service). Or, if you’re a reservist or National Guardsman, it’s probably where you live.

Several states do not have a state income tax, and others exempt portions of military income from state taxes.

Federal law prohibits another state from taxing the military wages of nonresident military members stationed there. However, the state where you’re stationed can tax other non-military income, like income from a second-job, independent contract, or a gig like Uber driving.

So, if you are a resident of South Carolina but stationed in North Carolina, you won’t have to pay North Carolina state taxes on your military income. South Carolina would tax your military income instead. Some special tax provisions apply to military spouses. The Military Spouses Residency Relief Act (MSRRA) allows military spouses (in most cases) to choose to be taxed by the service member’s state of legal residence instead of the duty station state for their earned income and most other income.

Income earned in a combat zone is tax-exempt. You won’t have to show that amount of income earned from combat on your tax return.

DFAS will list both taxable and tax-exempt incomes on your W-2 if you have qualifying time in a combat zone. Some services in support of a combat zone may also qualify for tax exemption. (This most often applies to pilots and members of the Navy).

Another benefit of deploying to a combat zone is that you may still be eligible for the Earned Income Tax Credit, which can increase your tax refund.

The Earned Income Tax Credit is a refundable tax credit that applies to workers with low to moderate incomes.

But, you can decide to include your nontaxable combat pay in your calculations as earned income counted toward the EITC, even though you’re not paying federal or state income taxes on that combat pay.

Including combat pay as earned income for the EITC calculations may reduce the amount of tax you have to pay and may increase your income tax refund through the EITC. Learn more on the IRS website.

You should calculate your income taxes using both your combat pay as earned income for the EITC and without it to compare refund amounts.

Deploying to a combat zone reduces your family’s taxable income, which may help you qualify for low-income tax credits that might not be available otherwise.

Being Stationed Overseas But Not In a Combat Zone

If you’re stationed overseas, in most cases you should treat your income tax and tax filings exactly like you would if you were in the United States. You must continue to file your federal income tax and state taxes for your state of legal residence by the filing date.

Members of the military and government civilians serving in a combat zone can receive an automatic income tax extension if needed to file their income taxes.

The extension applies to filing deadlines and payments. It also suspends audits and enforced collections for 180 days until after the service member or civilian has left the combat zone.

Military members living or serving outside of the United States or Puerto Rico are entitled to an automatic two-month filing extension. But, keep in mind that you will have to pay interest on any tax due that was not paid by the original filing deadline.

You can get more details about extensions here.

These allowances can account for a significant portion of a military member’s total compensation, especially for junior soldiers, sailors, airmen and Marines.

If you are a member of the National Guard or Reserves and have unreimbursed travel costs for drill or other duties that are more than 100 miles away from your home, you may be able to deduct those travel costs on your income taxes. For more details on qualified expenses take a look at the Form 2106 Instructions.

Typically the address the IRS has on file is the one that is on your last tax return. With frequent moves, service members and military families should update the address on file to ensure no correspondence is missed. States should also be updated.

Usually, this comes up due to a PCS when the spouse is claiming the service member’s state of legal residence for taxes in accordance with the MSRRA.

If your employer doesn’t withhold taxes for your state of legal residence, consider paying estimated taxes throughout the year to avoid owing when filing your state tax return.

Some military couples think that if they live separately that they have to file tax returns as “Married Filing Separate.” That is not true.

If you prefer to keep your taxes separate, remember that at best, filing separately has the same total tax result as filing jointly. At worst, it disqualifies taxpayers for credits or deductions, causing couples to pay more in taxes than is necessary.

The Retirement Savings Contribution Credit is available to many service members – particularly those in lower pay grades. Even at higher pay grades, a large portion of military compensation is non-taxable, so it doesn’t count against the income limit for this credit. Taxpayers may miss the saver’s credit if they don’t transpose all of the information from box 12 of the W-2 into their tax software.

Enter IRA contributions in your tax software separate from TSP/401k contributions. If entered correctly, the IRA deduction will show on your Schedule 1 (Form 1040).

Military Permanent Changes of Station (PCS) can lead many military members to become landlords. Having a rental house complicates tax returns. Your first tax return for a rental property is very important in setting the stage for your future tax returns.

Pay special attention to basis and depreciation. If you make errors here, they’ll carry forward to future years. More information on common errors with rental property can be found here.

There are many more tax situations that apply to military members and their families. In fact, it can be a part-time job just keeping up with them all. Thankfully, there are resources available to you so you don’t have to study the whole tax code.

H&R Block has been producing tax preparation software for years, with special consideration to ensure their software can handle military tax situations.

They also provide a variety of different software versions for more complex situations that apply to many military members, such as small business or freelance income, rental properties and more.

Depending on your tax situation, you may qualify to file your federal taxes free with H&R Block – even if you own a home, itemize deductions, have charitable contributions and have medical or childcare expenses.

H&R Block gives you the freedom to file your tax return anytime, anywhere, on any device. The company also provides a “maximum refund guarantee” to help you get back the most money possible.

How has being in the military impacted you filing your taxes? What challenges do you face when filing each year? Hank Coleman is a Major in the U.S. Army and a writer who focuses on personal finance, investing, and retirement. Hank holds a Master’s Degree in Finance and runs the site Money Q&A. His writing has been featured on sites such as The Motley Fool, Military.com, and many others. You can follow him on Twitter at @MoneyQandA.