Home Military Career & Transition Can I Get Out of the Military Early?

Can I Get Out of the Military Early?

http://traffic.libsyn.com/militarywallet/TMW_016_Get_Out_of_Military_Early.mp3Podcast: Play in new window | DownloadSubscribe: Apple Podcasts | Google Podcasts | RSSI receive dozens of emails each week. I read every email I receive, and I respond to as many emails as I can. Most responses are private, but sometimes I like to take a reader question and turn it into a podcast…
Advertising Disclosure. I receive dozens of emails each week. I read every email I receive, and I respond to as many emails as I can. Most responses are private, but sometimes I like to take a reader question and turn it into a podcast or an article. This article is one such occasion. I have received multiple reader questions asking if it is possible to get out of the military early. And that’s exactly what we’re going to talk about today in great detail.

Here is the reader question:

Hello, I am in the coast guard and I am not happy here at all. I have only been in for about 3 months and I want to get it and go about my life in a different way. Am I able to do that? And how would that affect my future?

Can You Get Out of the Military Early? 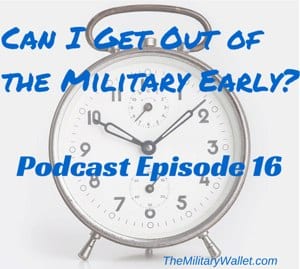 You signed a contract, and you are expected to honor that contract. Barring a breach of that contract on your end, which you don’t want to do, you should expect to serve out the remainder of your contract. On their end, the military will uphold their end of the bargain as well. You will have a job for the duration of your enlistment, barring a few unforeseen circumstances, which we will discuss in a few moments.

That means you have a guaranteed job for the next few years. You have a fixed income, health care, and a variety of benefits that would make most of your friends back home pale with envy. But we’ll get to all that.

Let’s talk about your contract. You are expected to serve out the duration of your enlistment. During that time, the military will spend hundreds of thousands of dollars training you in your career. That includes housing you, feeding you, and paying you while all you are required to do is learn. Learn how to be a functioning member of your branch of service. Learn how to do your job, learn how to follow directions, and eventually, learn how to lead. Your job for the first 6-12 months is simple: Be a sponge. Learn.

You probably signed a 3-6 year contract, and barring a few exceptions, you should expect to serve the duration.

Here are a few of those exceptions: The military has certain standards all service members must meet. This includes health, physical fitness, academic standards, and more. Here are some examples:

There are two main types of early separation – voluntary and involuntary. The difference is whether you decide to get out or the military tells you to get out. This can have a dramatic impact on your future benefits, separation pay, and more.

Involuntary Separations. This is just what it sounds like. You essentially get laid off from the military. This is happening to thousands of servicemembers as we speak. The military is downsizing through a program called Force Shaping. Basically, the military tells members in certain career fields and pay grades that they will no longer have a job. But here is the important thing to know – it usually doesn’t happen during a servicemember’s first term (though it can happen at the end of the first term; basically the servicemember just isn’t allowed to reenlist in their current job because it will no longer exist). Another important thing to know is that if you have served 6 years you will be eligible for involuntary separation pay.

Voluntary Separations. Sometimes the military offers members the opportunity to get out of their contract early. There are several ways this can happen. In some cases, members will be allowed to simply leave their contract and go on their merry way. However, members often incur a service commitment to the Guard or Reserves if they leave active duty early. This could be a Regular Reserve or Individual Ready Reserve (IRR) commitment. For example, the Air Force offers the Palace Chase program. In exchange for getting off active duty early, servicemembers agree to serve double the time left on their contract in the Air National Guard. Other branches may have similar programs that allow active duty members off early in exchange for transitioning into the Guard or Reserves. Sometimes these programs even come with opportunities for additional bonuses or the opportunity to change career fields.

There may also be bonus or separation pay in some cases. Early retirement may be an option for some members, provided they have enough service time and their branch of service offers it to them.

How Would Early Separation Affect You?

There are several factors to consider, including your military discharge type, missing out on the experience and training you otherwise would have received, earning potential, missed benefits, and more. Let’s start with looking at the types of discharges and the impact it can have on your post-military career.

Bad Conduct discharges and dishonorable discharges or dismissals can have long-term negative impacts on your ability to work in certain types of jobs, and may impact you in other ways.

The first 3 months of everyone’s military life sucks. It just flat out does. In some branches, you’re just getting through basic training. If you’ve been in 6 months, you’ve probably made it through basic, and either all the way through tech school or AIT, or at least part way.

Your initial training time is designed to break you down and build you back up. To train you to understand how the military works, and to act accordingly. It’s not all sunshine and unicorns. Sometimes it sucks. But you can and will grow as an individual, and as a member of a highly functioning team.

The point is, at 3 to 6 months into you military career, you haven’t had enough time to get through training and actually experience the operational military yet. And I can guarantee just about every veteran will tell you there is a huge difference between the first 6 months of your military career and what you experience in your second year. Or third year. And so on.

Things change when you get proficient at your job

Quitting now will set an enormously bad precedent for your life.

The military is one of the first major challenges many young adults face. How will you feel going through the rest of your life knowing that you gave up the first time things got tough? You’ll be more likely to give up in the future when things aren’t as fun as you expected them to be. Leading you to a life of job-hopping, failing to foster deep relationships, and pretty much never excelling at anything because it was tough.

You probably think I’m going overboard with the previous statements. But I’m not.

Where to Go From Here:

Give it some time – you haven’t been in long enough to see the operational military. At least not enough to fully understand your role in it and the opportunities that are before you.

Look, I know the military isn’t perfect and it may not be the long-term answer for your career. That’s why I separated from active duty after I finished my first enlistment. But there are also many amazing opportunities to be had during your time in the military. You will have a variety of experiences you will cherish the rest of your life, even if you only serve 4 years. You will make lifelong friends, even if you only serve 4 years.

You may even decide that you miss the military long after you get out. I did that. I joined the Air National Guard 8.5 years after I left active city because I missed being in uniform and being part of a unit and working toward a goal that is larger than anything I could do on my own. I never would have understood that line of thinking during my first few months in the military. And it’s likely that most servicemembers don’t truly grow to appreciate that until they have served long enough to actually see and understand how their role works in the grand scheme of things. And that takes time.

I encourage you to give it some more time and see how things work out. My guess is that if you finish your initial contract and decide to get out, you will be glad you stuck with it, even if you realize part way through the military isn’t for you in the long run.

And I can also pretty much guarantee that if you were able to get out tomorrow and you did, you would regret giving up on yourself and the military for the rest of your life.

Stick with it. You’ll be glad you did. 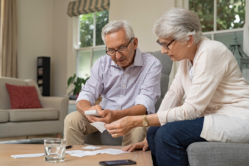