Honoring Those Who Served – Free Burial for US Military Veterans

Several years ago, my grandfather passed away. Even though it is a difficult time for our family, one thing made it easier for us. My grandfather served in the US Navy during WWII and as a veteran of the US military, he was eligible for a free burial with full military honors. My wife’s family…
Advertising Disclosure. 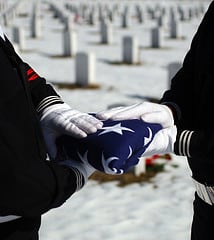 Several years ago, my grandfather passed away. Even though it is a difficult time for our family, one thing made it easier for us. My grandfather served in the US Navy during WWII and as a veteran of the US military, he was eligible for a free burial with full military honors. My wife’s family recently experienced a similar loss, when her uncle, A Korean War Era veteran, passed away. He too was eligible for military funeral honors.

Funerals are expensive, with the average funeral costing between $5,000-10,000. Military Funeral Honors send the veteran off in style and save the family a lot of money at a time when they are already stressed with the passing of their loved one.

Honoring Those Who Served

Military funeral honors are a benefit earned by all who served honorably in the US Armed Forces and are provided free of charge as a last “thank you” from a grateful nation. To be eligible for a free military burial, a veteran must have died while on active duty or must have received a discharge other than dishonorable. Veterans may also be eligible if they were a member or former member of the selected reserve.

The military will provide the Military Funeral Honors to the eligible beneficiary, which consists of the ceremonial folding and presentation of the American flag and the sounding of Taps.

The ceremony is normally provided by a military funeral honors detail of two or more uniformed military personnel, with at least one being a member of the veteran’s parent service.

In the event current uniformed personnel are not available for the service, many other veterans service organizations provide military funeral honors.

Public Law 106-65 requires that every eligible veteran receive a military funeral honors ceremony, but the government doesn’t have the resources to track down each veteran at the time of death. It is your duty to let your family know your desires so they can make your funeral arrangements after you pass.

You should also let your family know the location of your DD Form 214 (verification of military service) or other discharge documents, which they will need in order for you to receive Military Funeral Honors. You may also wish to request a full copy of your military service records as having this documentation on hand will expedite the process.

How to Arrange Military Funeral Honors

To arrange Military Funeral Honors, contact your local funeral home. Upon request of the next of kin or authorized representative, the funeral director requests the honors from the Military Service in which the veteran served. The Department of Veterans Affairs (VA) National Cemetery Administration cemetery staff can also assist with arranging Military Funeral Honors at VA national cemeteries. When military funeral honors at a national cemetery are desired, they are arranged prior to the committal service by the funeral home.

Free Burial at Sea for Veterans

Burial at sea was a Navy tradition of yore, but it is still available for veterans who wish for it. Burial at sea services are performed while the vessel is on official duty, so it is impossible for family members to be present. Following the burial at sea, the ship’s commanding officer will notify the surviving family members of the date, time, latitude, and longitude at which the burial took place.

Which Documents Do You Need for a Military Burial?

In addition to qualifying military service, the veteran must be able to prove his or her military service. This is most commonly done with the DD Form 214, which is the record of service each military member receives upon discharge (prior to 1950, each service used its own discharge form).

Thankfully, there are other ways to prove military service for last burial rights and other veterans benefits beyond the DD Form 214. In many cases, you can provide an Honorable Discharge certificate, retirement order, military documentation from your state if you served in the Guard, or a variety of other documents.

The following is a list of approved Veterans Military Discharge Documents which will satisfy the VA requirements for proof of honorable military service. You can use these forms to establish eligibility for a military burial, or for requesting a headstone or marker. You can find the full list at the VA.

Burying a family member is always a stressful time. If you are a veteran and plan on receiving a military burial, then please inform your spouse, children, or other survivors of your intentions and have your documentation in order in advance. The last thing your family needs to stress about during this time is finding your military records or requesting a copy of them from the National Archives – which could delay your burial service. Take the time to put together a folder with your military documentation and other records so your family can take them to the funeral home. From there, the funeral director should be able to take care of the rest of the details with the VA.

If you have any questions or concerns about your documentation or proof of honorable military service, then please take your concerns to a local funeral parlor in advance. This way you and your family can be prepared. Visit the VA Cemetery Services or osd.mil sites for more information. 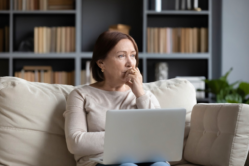