Military discounts can help you save a lot of money on your purchases! We show you how you can prove your military service to get the best discounts.
Advertising Disclosure. 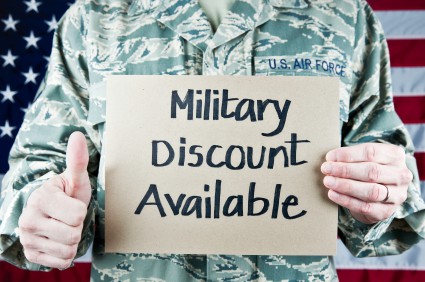 Many companies offer military discounts, which is an awesome way to show their appreciation for all military veterans have done for our country. As a veteran, I certainly appreciate the gesture, and I try to thank the company offering the discount whenever it is possible. As well-meaning as the military discounts are, however, they sometimes cause problems because there is no general standard among stores regarding discount eligibility.

Let’s start off with the most important topic – who is eligible for a military discount. This is probably the most debated topic I’ve seen regarding military discounts. Unfortunately, there isn’t one standard. The important thing to remember is that stores aren’t required to give military discounts – it’s a privilege, not a right. The stores set the rules, and we as military members and veterans, should honor the standards set by the stores.

Let’s take a look at some different groups of people who are commonly offered military discounts at various locations:

As you can see, there is a wide range of people in this list. And it doesn’t always make sense. Many stores which offer military discounts do so out of generosity, but sometimes their policies are made without understanding how the military ID card system works. Compounding this is the fact that there isn’t a standard for a national veterans ID card – yet (legislation has been passed into law, but the cards haven’t been issued yet). As a result, some military discount policies are misguided.

I will be the first to say that it doesn’t make sense to give a military discount to a dependent, who is someone who never wore the uniform, then deny a discount to someone who served, but didn’t retire. Yes, spouses and dependents make sacrifices on the home front, but they don’t warrant greater recognition than someone who served in a combat zone, but didn’t remain in the military through retirement. (I am qualified to make this statement as I both both served in a combat zone, and was a military spouse after I separated from the military – my wife served on active duty while I was a civilian).

But here is the kicker: it doesn’t matter what you or I think – we don’t make the rules. The stores make the rules, and as this is an act of generosity on their part, it’s always best to honor their wishes.

Many stores publicize military discounts, while others don’t announce them publicly. You will be surprised how often companies will offer you a military discount if you just ask for it. All it takes is a simple question while you are ordering or checking out.

Just ask, “do you offer a military discount?”

In some cases you will be told no, but sometimes you will be pleasantly surprised. Just ask, and always thank the person if you receive a discount. And if not, no hard feelings. Remember, this is an act of generosity on their part, not a right veterans deserve.

*Bonus tip: Your odds of success increase substantially when asking for a military discount on a military related holiday, such as Memorial Day, Fourth of July, Veterans Day or other national holidays. In fact, many stores don’t offer military discounts, except on these holidays.

After determining eligibility, the next most important thing is to be able to prove you served in the military. If you are on active duty, or are a retiree, then this likely isn’t a problem, as you should have a military ID Card. But proving military service can be a lot more difficult for a military veteran who didn’t retire, and isn’t receiving disability from the VA.

Unfortunately, there is currently no standard for proving military service, outside of carrying around your current military or retiree ID card, or a DD Form 214. Carrying your DD Form 214 isn’t always a good idea as it has your Social Security Number and other personal information on it. The good news is Congress has passed a law that will allow veterans to get an official Veterans ID card through the VA. We don’t have word on when they will begin issuing these ID cards, but it looks like it will be sometime in 2017.

Here are the current forms of ID cards you can use to show proof of service:

Again, because there is no standard, some stores only accept certain forms of ID or proof of service.

Need proof of service? If you served in the military, but don’t have any records to prove it, you can get a copy of your DD Form 214 or a copy of your service records form the National Archives. Both are free and easy to do, and can help you prove your military service.

As mentioned above, some military discounts are seemingly misguided regarding who is eligible, and who is not. But it’s not our place to make that judgment. As military discounts are made out of the generosity of the store offering the discount, it’s in our best interest as military members and veterans to accept a discount with humble thanks when it is offered, and be understanding when it is declined.

If you believe you should be eligible for a discount, then politely ask to speak with a manager and explain the situation. But always be sure to fully understand the company’s policies on military discounts before doing so (and keep in mind policies may change at any time, so be sure to be up to date).

One of the biggest complains we have heard is about are the Home Depot and Lowe’s discounts. These companies offer military discounts everyday, however, they have changed the eligibility a few times, so the military discounts may only be available to a segment of the military and veteran population. Be sure to review their corporate policies before arguing with management about the discount you are “entitled to.”

For example, the Lowe’s military discount is available to all current and former military members every day. You can register for a MyLowe’s account and provide your MyLowe’s card or phone number when you check out at the store to have the 10% discount automatically applied to eligible purchases. Your online purchases will also automatically receive the discount if you have registered with the MyLowe’s program and you are logged into your Lowe’s account when you make your purchase.

On the other hand, The Home Depot’s military discount is only available on a daily basis to current military members, retirees, and veterans with a service-connected disability and a VA ID card that specifies the service-connected rating. Non-retired military veterans without a VA rating are only eligible for the discount on certain days of the year, such as Memorial Day, Fourth of July, and Veterans Day.

Do you have any other tips on asking for or receiving military discounts?

Our Favorite Black Friday Discounts in 2022 Military Discounts on Cars, Trucks and Other Vehicles