Military Financial Horror Stories – or How Not to Buy a Car

When I was in the USAF I witnessed a lot of good and bad financial decisions made by the Airmen I worked with. Some decisions were great, and some were horrible. For example, I knew a MSgt (E-7) who owned 5 houses and rented them out. He also owned his vehicles and a small Cessna…
Advertising Disclosure.

When I was in the USAF I witnessed a lot of good and bad financial decisions made by the Airmen I worked with. Some decisions were great, and some were horrible. For example, I knew a MSgt (E-7) who owned 5 houses and rented them out. He also owned his vehicles and a small Cessna airplane outright. He was great at managing money and I learned a lot from him.

Military members are proud of their vehicles. A lot of military members are young and single and have a disposable income to buy nice cars and other cool toys. I knew quite a few people who drove classic antiques, late model muscle cars, souped-up tuners, quad cab dualies with a supercharged Hemi, etc… You name it, I probably knew someone who drove one. And there’s no problem with that – if you can afford it. The problem comes when you drive more car than you can afford.

We deployed often at the base where I served the final 3 years of my enlistment. After September 11th, we maintained a constant presence in the Middle East, with many Squadron members rotating back and forth every three or four months. It was a difficult pace to keep up with, but it also afforded many military members the opportunity to amass a large savings account because all the tax-free combat pay they earned while deployed.

One Senior Airman (E-4) from my Squadron came back after several deployments and decided he wanted a new truck. His old truck was about 15 years old and was beginning to fall apart. After multiple deployments, he had saved quite a bit of money and was prepared to put make a substantial down payment on his new truck. He did his research, negotiated a good deal, made a large down payment, and drove off the lot in a shiny new Chevy Colorado.

An Airman (E-2) in our Squadron fell in love with the SrA’s new truck and decided he wanted to buy a similar new truck. The Airman was new to the military and was enjoying the first regular paycheck he had ever pulled down. He was new to the area and didn’t have a vehicle. I’m sure you can see where this is going…

Without talking to anyone in the squadron (supervisors, fellow Airmen, etc.) he got a taxi to the local mall, walked down to a dealership, found the truck he wanted, talked to the dealer for a few minutes, got a credit check, signed some papers, and drove off in his new truck. He then immediately drove down the road to have a new stereo and subwoofer installed.

The rest of the story

The next day at work a couple admired his new truck. When asked whether he got a good deal on it, he didn’t have an answer. He didn’t know people could negotiate when buying a new vehicle. He just walked into the dealership, found the truck he wanted, got dealer financing approved, and paid full sticker price. He didn’t know about credit scores, negotiating, or anything about buying a new car.

To put it lightly, he got raked over the coals on the deal. He didn’t have a good credit score so his loan came in at over 19%. He also didn’t have a vehicle to trade in or a down payment to make, which didn’t help him on the final price. On top of that, he had a bad driving record and didn’t check on the price of insurance before buying his truck. Because of the loan, he was required to have full coverage insurance, for which he paid about $250 per month.

By the time he paid his car payment and insurance every month (about $700), he had just enough money left over to cover his cell phone bill and a little bit of gas money. Luckily for him, he was living in the dorms and had access to the chow hall. Otherwise, he would have had to park his shiny new truck in the parking lot because he would have to choose between gas and food.

New cars aren’t bad; living beyond your means is bad

There is nothing wrong with buying a new car if you can afford it. In fact, I think there are many good reasons for buying a new car (actually, I bought a new car), but I almost always recommend buying quality a used vehicle if possible. But the problem doesn’t come from trying to decide between buying a new or used car.

The problem comes when you give in to temptation and live beyond your means. The Airman in our Squadron could have easily gone with a nice used truck and probably would have been happier in the long run. Sure, it wouldn’t have been as shiny and it wouldn’t have that new car smell… but he wouldn’t have struggled on a month to month basis to make his payments.

The story doesn’t have a horrible ending though. A couple months later he promoted to Airman 1st Class (E-3), which resulted in a couple hundred extra dollars per month. He also deployed a few months later and was able to park his truck for a few months and save some money. It wasn’t enough to pay off his vehicle, but it was enough to establish an emergency fund and give him some financial breathing room. 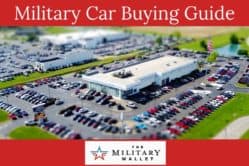 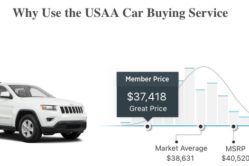 10 Car Buying Tips: Save Big on Your Next Purchase